Catch the Spirit! The 1991 B.C. Summer Games in Coquitlam

Summer is here and as we move ahead in B.C’s Restart Plan, we are looking forward to longer days, barbeques with loved ones we haven’t seen in a while and trips to the beach. Thirty years ago, in 1991, Coquitlam was celebrating its centennial, and marked this auspicious anniversary by hosting the B.C. Summer Games. This exhibit highlights the City of Coquitlam Archives’ collection of photographs and records related to the games and explores the journey of bringing the games to Coquitlam.

Cast your mind back to 1983: Billie Jean is playing on the radio, Return of the Jedi is in theatres and Apple has just released the Lisa computer. Here in Coquitlam, the City Centre as we know it today was just starting to take shape. Coquitlam Centre had already opened in 1979 to massive crowds and was continuing to draw people to the area that would become the heart of Coquitlam. With the population of Coquitlam growing, the District’s profile was also increasing.

As the city was developing, so too was an idea—a plan that would further raise Coquitlam’s profile within the province. That idea was to host the B.C. Summer Games. So, in 1983 the B.C. Summer Games Bid Promotion was formed. The group was comprised of community members, city staff and Council members. One of those council members was Lou Sekora, who at the time was also Chair of the Parks and Recreation Committee, and he would soon become Coquitlam’s Mayor. Another member was Don Cunnings, long-time Director of the Parks and Recreation Department. 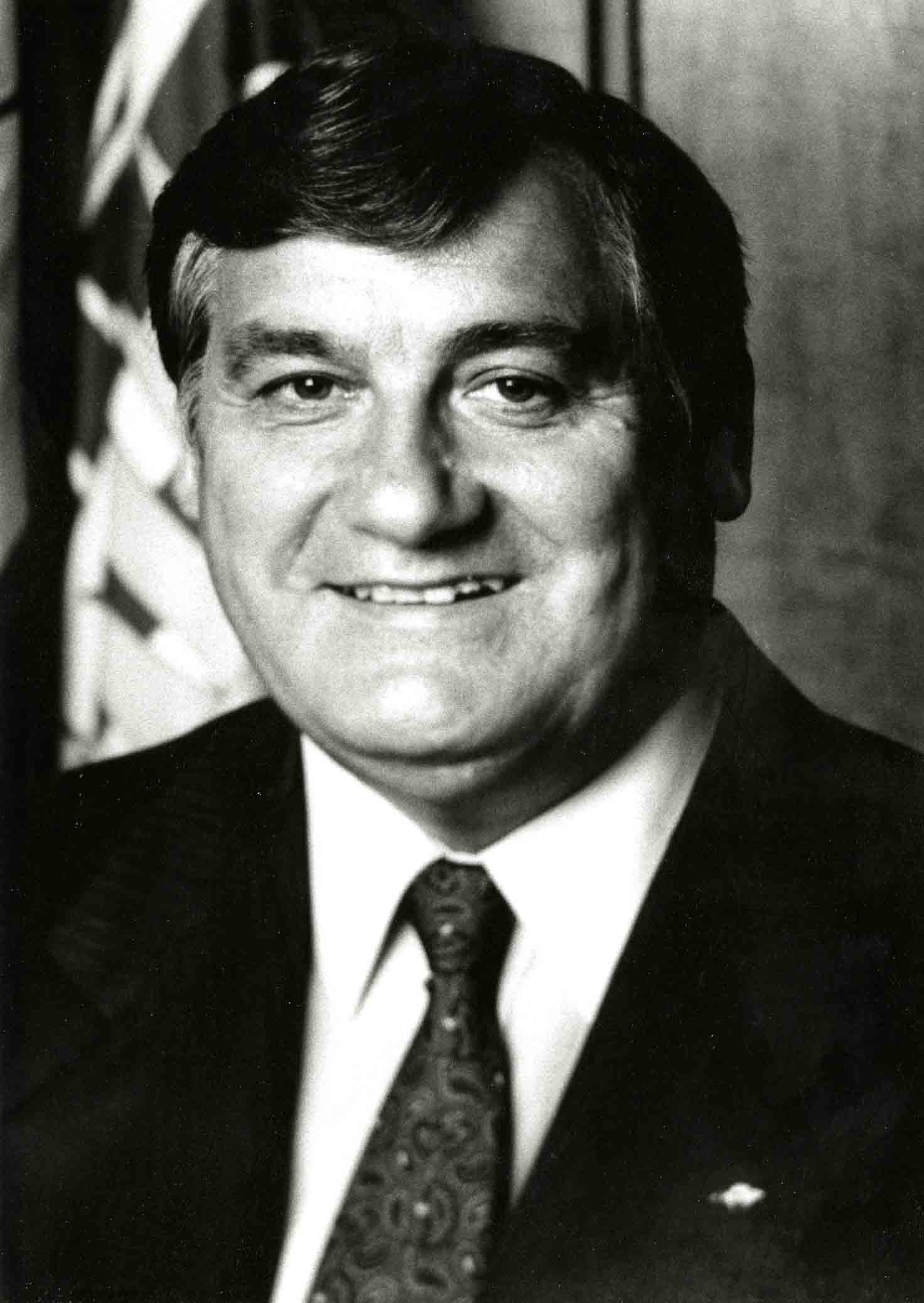 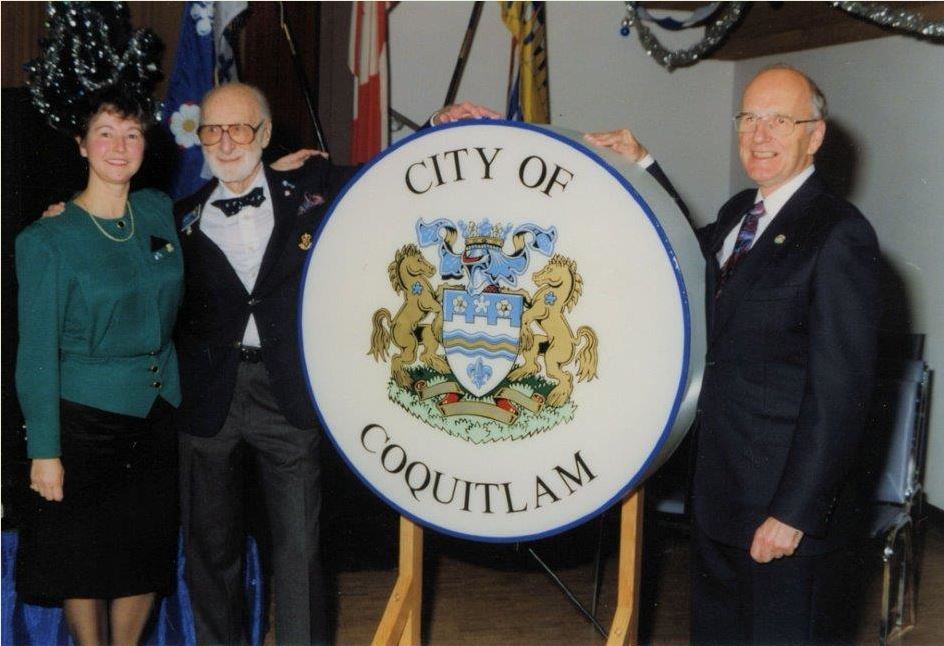 The B.C Summer Games Bid Promotion group competed against 20 other cities for the opportunity to host the 1986 Games, but the dream did not come true.

Not to be discouraged however, the group made another, this time for the 1989 games. The intention being that Town Centre Park, which was in the planning stages, would be the focal point of the games. Again it was not meant to be.

Nonetheless, on the horizon was the centennial of the incorporation of the District of Coquitlam – 1991 – which would be the prime opportunity for Coquitlam to celebrate. At this point, progress on the beautiful Town Centre Park had begun and for a third time, the B.C. Summer Games bidding committee applied to host the games. By now Lou Sekora was Mayor and was confident that the bid would be a success. In the Inaugural Council Meeting for 1987 he said, “We are bidding on the 1991 Summer Games in conjunction with Coquitlam’s Centennial. I feel we have an excellent chance of obtaining the games as a fitting Centennial celebration.”

Mayor Sekora was right. The bid for the 1991 B.C. Summer Games was accepted and the planning could begin.

The first step in planning the illustrious event was to form a Board of Directors. These folks were community leaders brought together by the Mayor. The Board of Directors then formed a Society, and it was the B.C. Summer Games Society that was responsible for bringing together the committee chairs as well as the thousands of other volunteers needed for an event of this magnitude.

The man tapped to be the President of the B.C. Summer Games Society was Brian Canfield, then President and Chief Executive Officer of BC Tel (now Telus). Canfield brought along two former employees of BC Tel: Dick Smith and Dave Welsford, to serve on the Executive. As well, Coquitlam Parks and Recreation Director Don Cunnings served as the municipal liaison for the event. 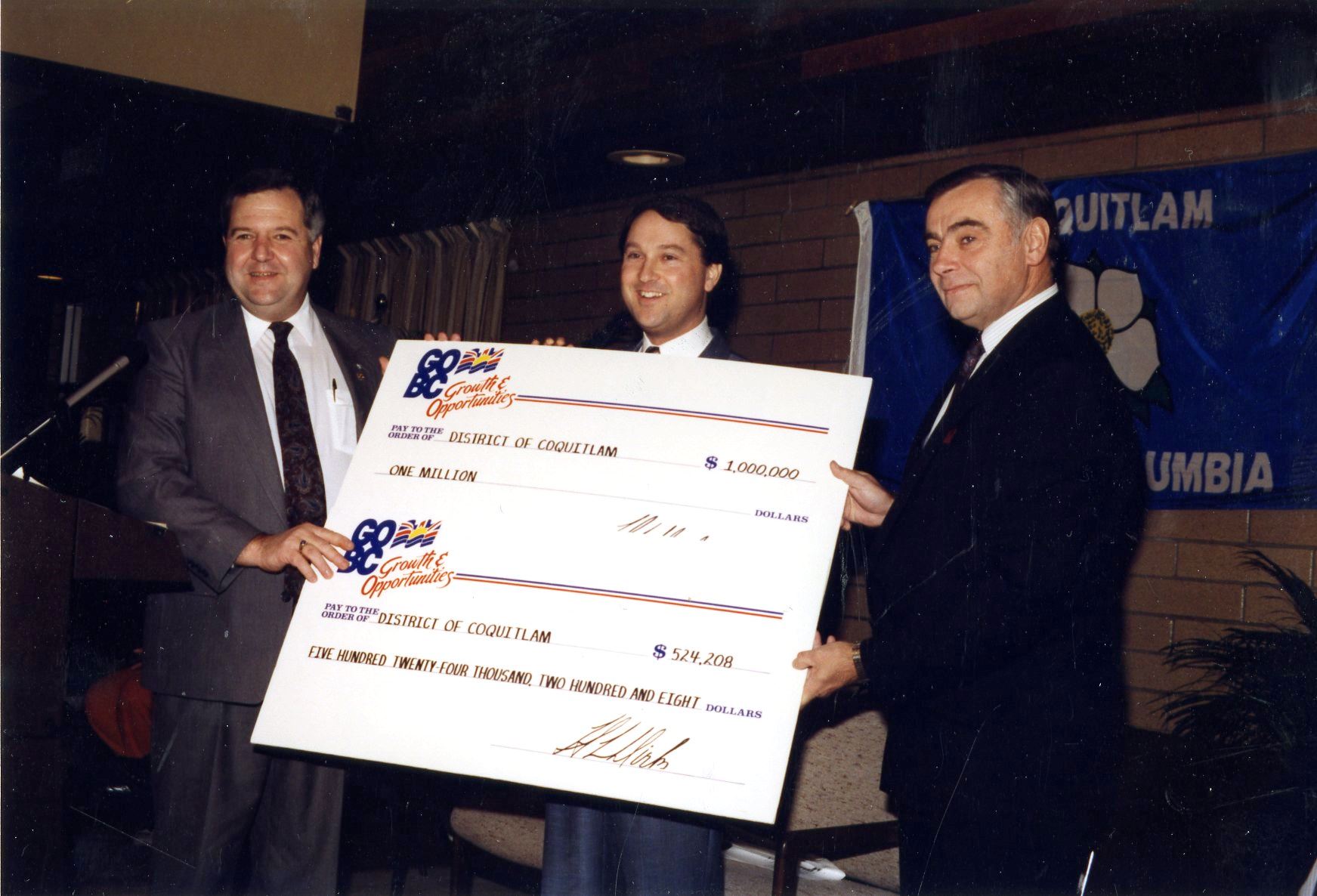 In June of 1990, members of the B.C. Summer Games Society travelled to Prince George, where they attended an exchange workshop in order to put to good use the lessons learned by the previous year’s B.C. Summer Games hosts. When planning a large-scale event like the B.C. Summer Games, there are many things to consider, from the major— such as the sporting events themselves and their venues— to the smaller but still important details, such as designing and producing merchandise and ensuring that all the participants are adequately fed.

The planning took a year of hard work, with long hours dedicated to applying for grants, securing or improving venues, organizing medical support and accommodation for athletes and recruiting thousands of volunteers.

On Thursday, July 25, 1991 the B.C. Summer Games officially opened with a ceremony at what was the ‘new’ Town Centre Stadium. The event was opened by Canada’s first female Premier, Rita Johnson.

The games included an array of over 29 sports and attracted athletes aged 13 to 80. The sporting events ranged from the more traditional volleyball, swimming, tennis, rugby and waterskiing to low-key events such as lawn bowling, cricket and black powder shooting — an event in which participants wore authentic, historic garb and fired guns loaded with black powder.  In total, the B.C. Summer Games included over 4,200 participants.

The games were not only a major event for Coquitlam, but for all of the Tri-Cities with events taking place at 32 venues across Coquitlam, Port Coquitlam, Port Moody and beyond. The opening and closing ceremonies were held at the newly built Town Centre Stadium (now Percy Perry Stadium), and the events packed into the four-day schedule were widespread from sailing in Rocky Point Park, canoeing along the Pitt River, cricket at Eagle Ridge Park, baseball in Blue Mountain Park and basketball at Como Lake School. 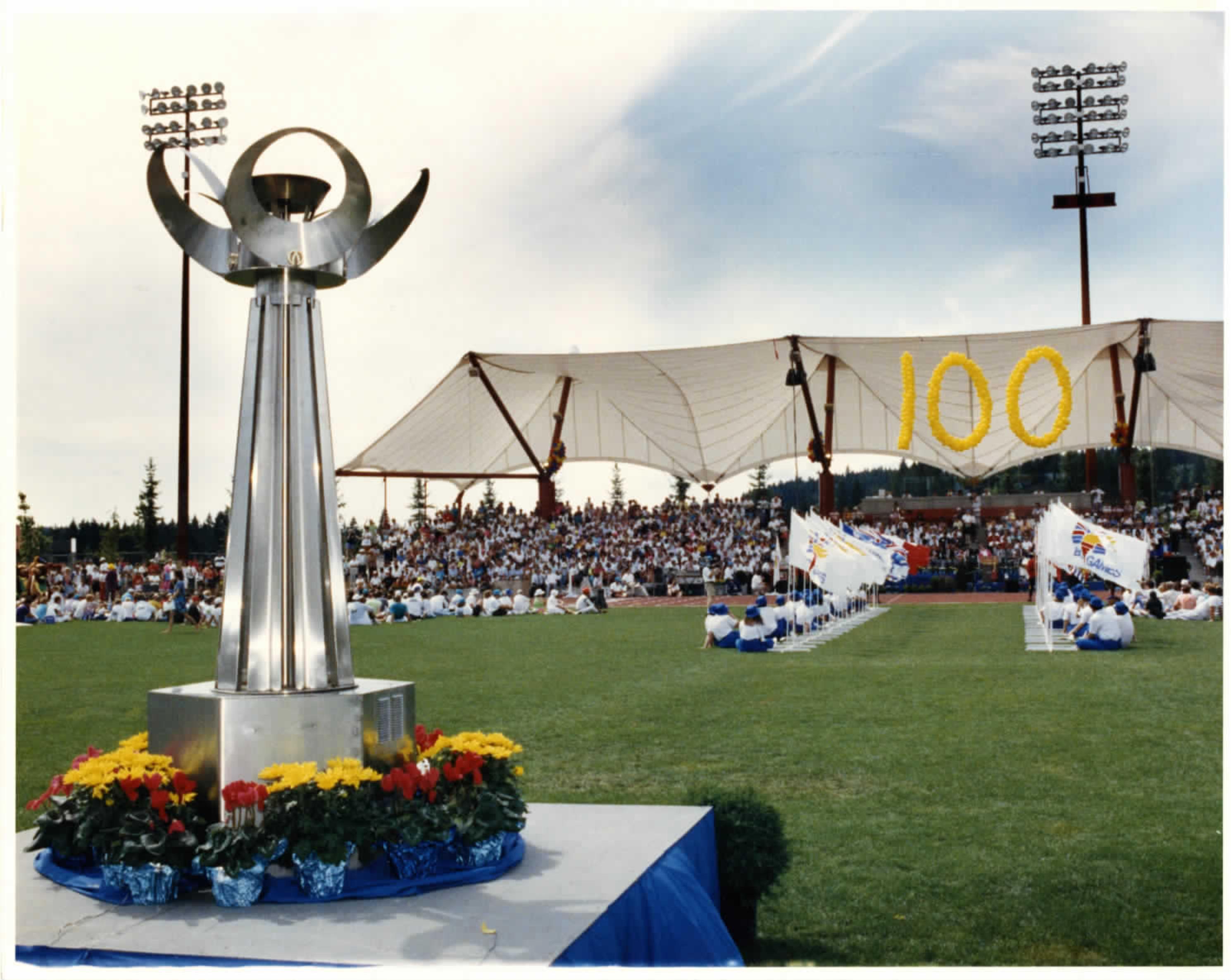 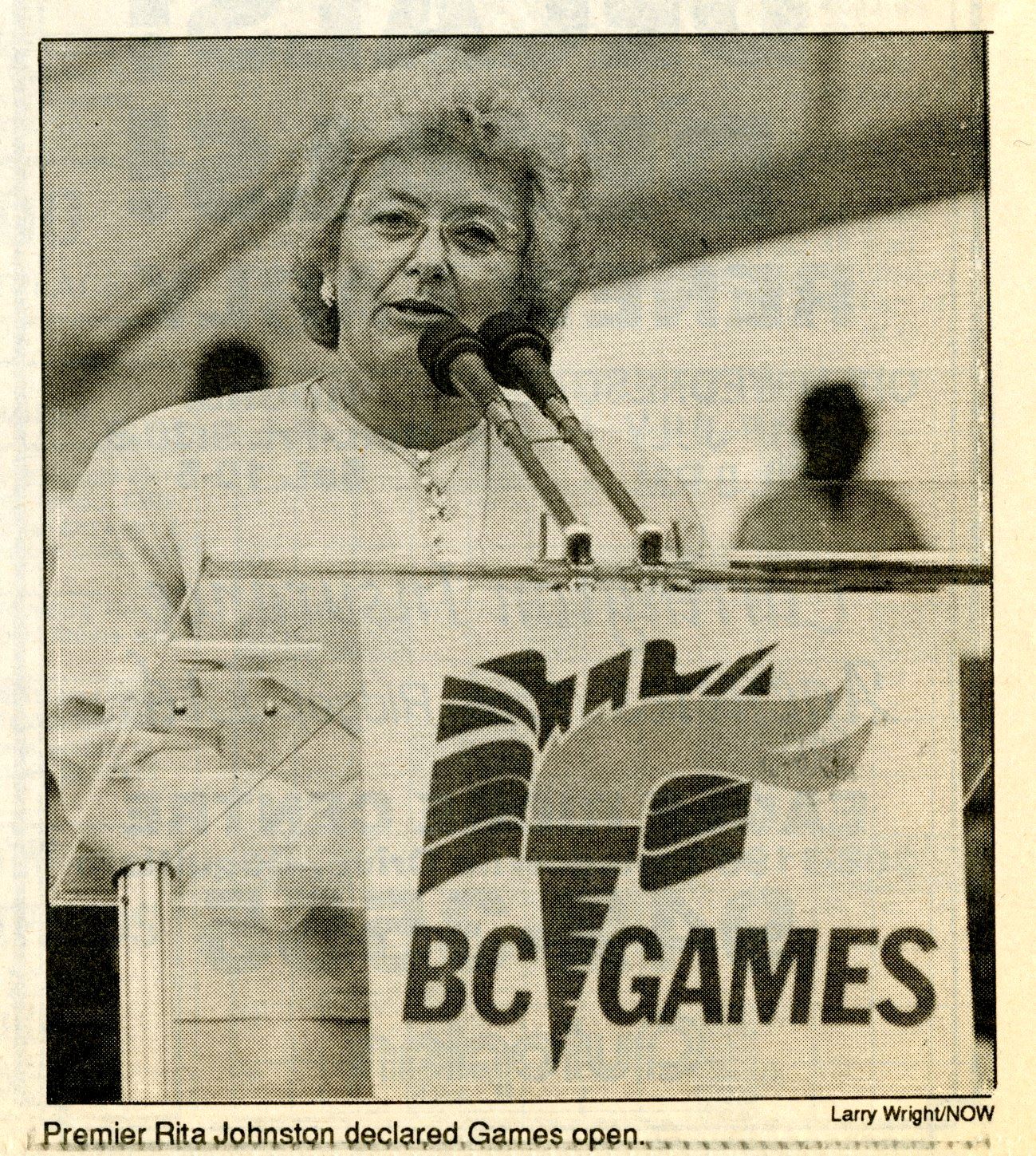 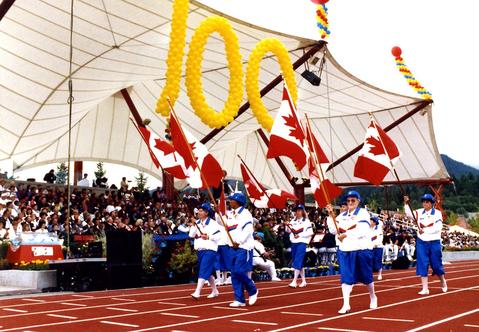 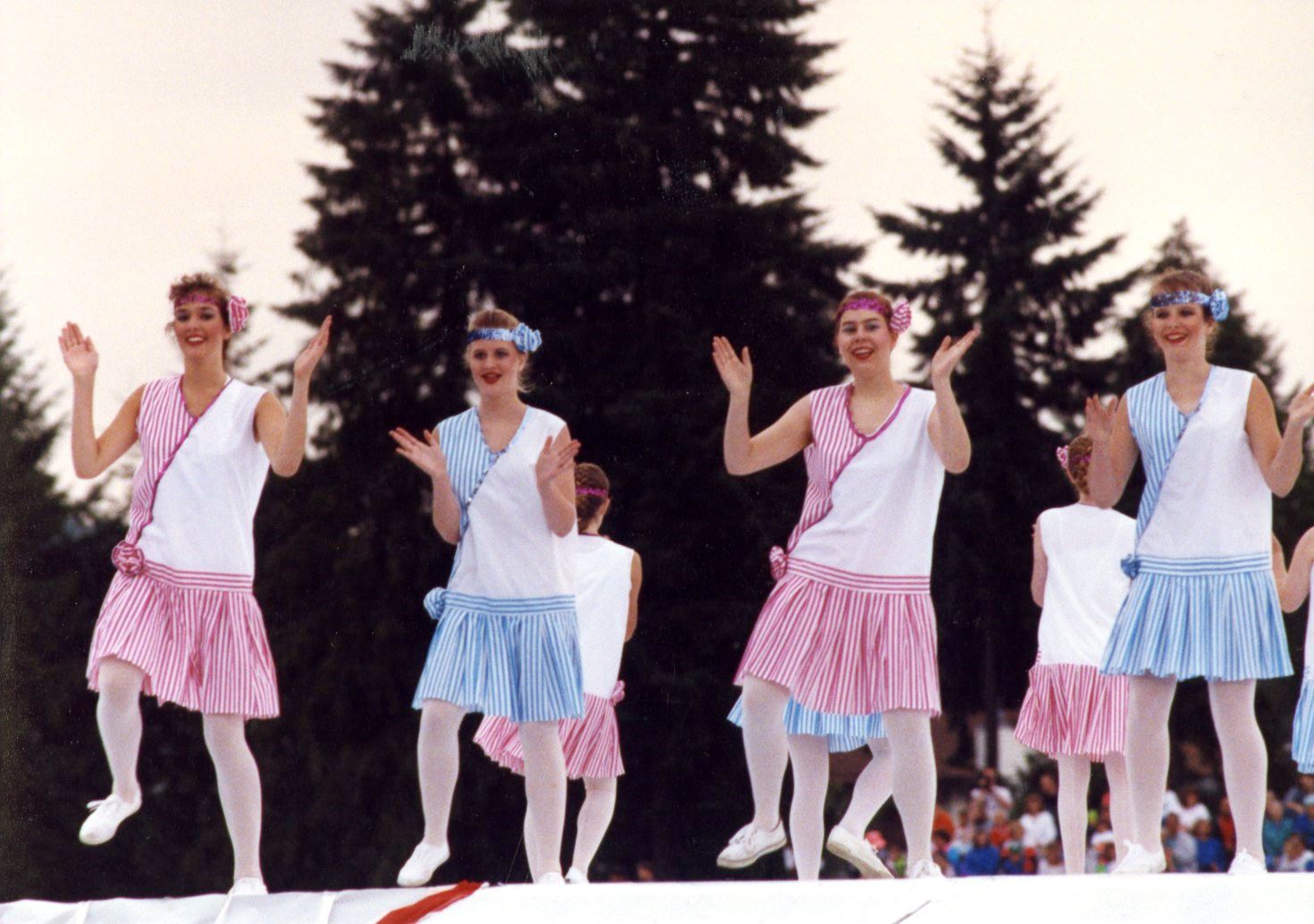 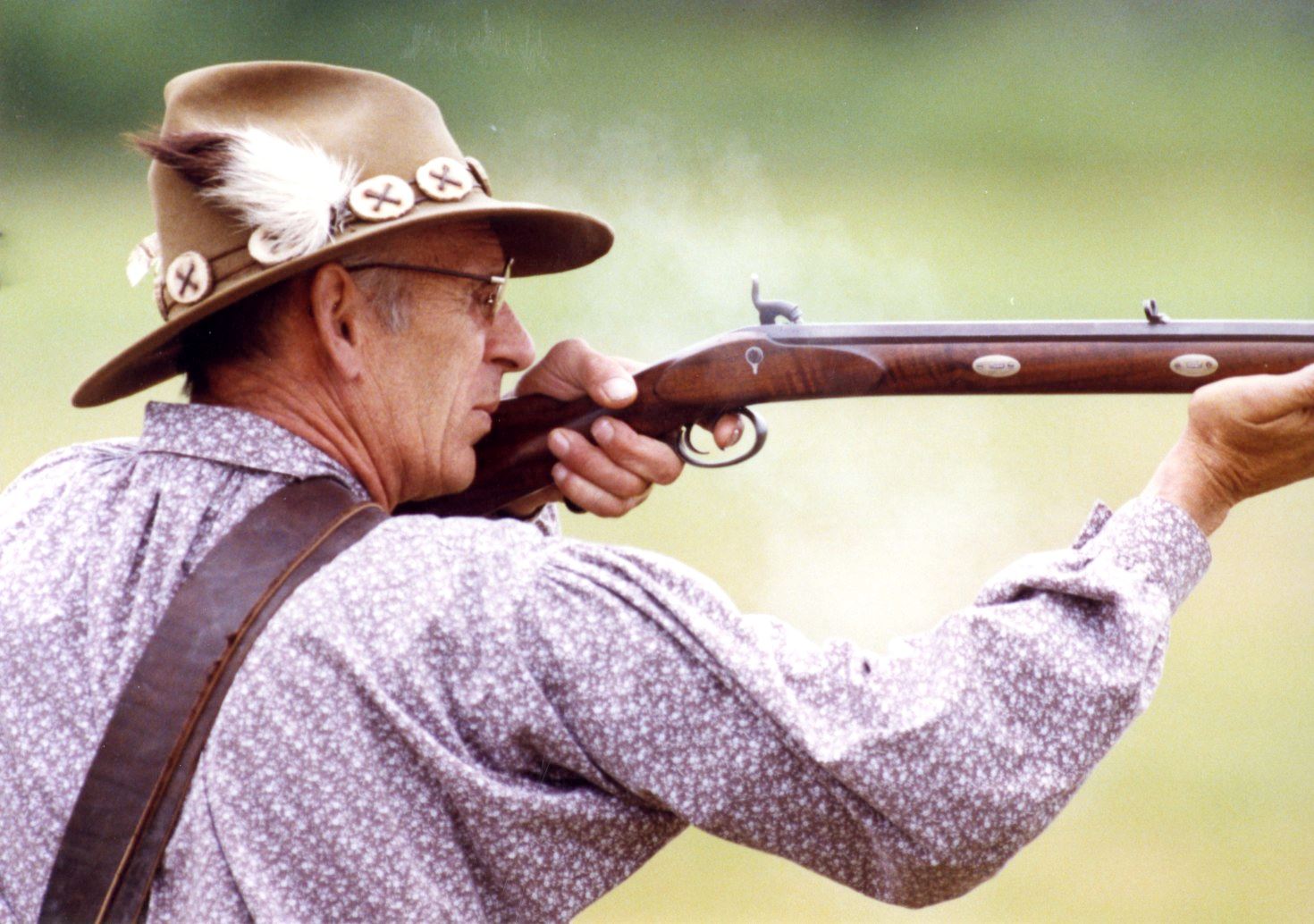 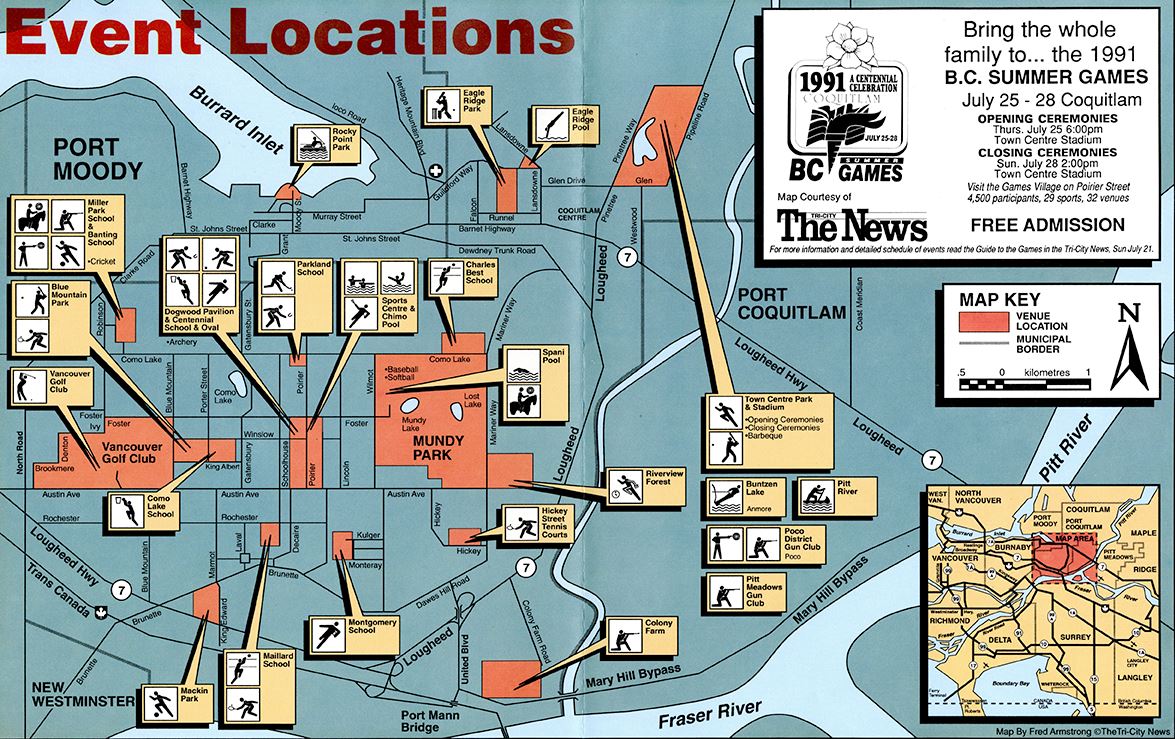 The legacy of the 1991 B.C. Summer Games is enjoyed every single day by the citizens of Coquitlam, students from the nearby Douglas College, as well as the rest of the Tri-Cities and even from across Metro Vancouver. Town Centre Park is now a 103-acre park located in the heart of downtown Coquitlam and boasts many attractions including Lafarge Lake, Percy Perry Stadium and a community plaza for live performance. 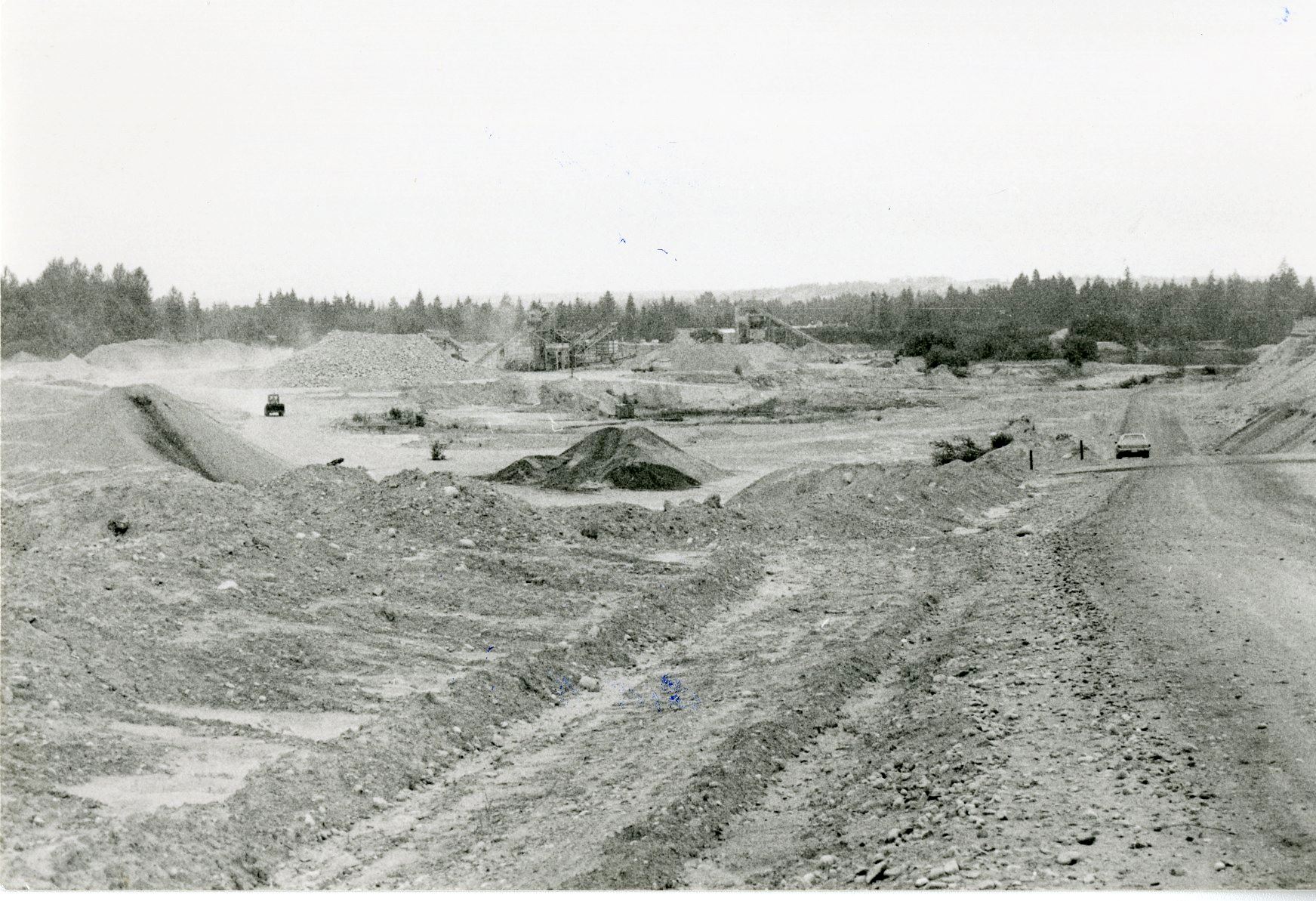 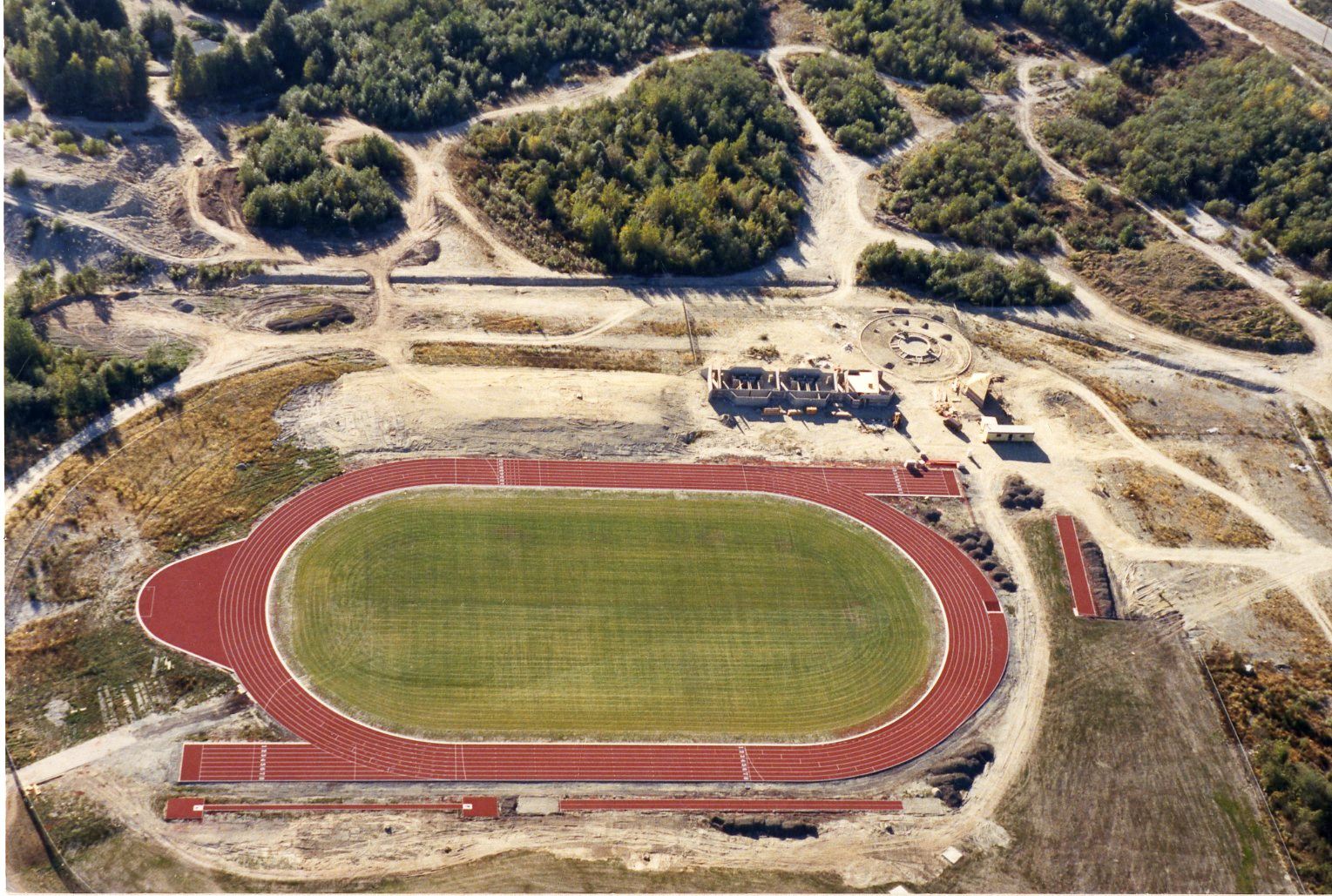 Town Centre Park had an interesting journey to become the park that it is today. The area was originally a gravel pit owned by the Lafarge Cement Company. It was Parks and Recreation Director Don Cunnings who suggested that the company could donate the land to Coquitlam in exchange for permission to dig gravel below street level as permitted in local bylaws. Lafarge Cement agreed and also eventually donated the rest of the land they owned in the surrounding area. The Province donated some adjacent land as well, so that the city could create a park and thus bolster its bid for the games. And so, the park was created and the stadium was built.

Since then, Town Centre Park has developed in new and exciting ways -  a community plaza was added as a place for civic events, including a stage for live performances and graduated hillside seating, as well as outdoor beach volleyball courts, a community garden, a spray park and foosball tables.

The south end of the park boasts the man-made Lafarge Lake, home to trout, ducks and turtles, and offers a 1.2km lake loop trail with improvements underway including accessible pathways and gathering spaces and a wharf to name a few. The park is home to amenities for different sports and tournaments including baseball, basketball and skateboarding. Cunnings Field, named after Don Cunnings, is one of the multiple sports fields in the park. Many large-scale civic events have taken place in Town Centre each year, including Lights at Lafarge, which typically attracts 8,000 to 10,000 visitors per day and Canada Day events that attracted tens of thousands to the park.

The next time you are enjoying some time in Town Centre Park, take a moment to remember the 1991 B.C Summer Games, the event that helped to create it.